When an SEO campaign is working well, it’s hard to submit to the idea of paying for other positioning, especially in organic results. PPC and SEO campaigns go hand-in-hand—ad results always appear before SEO—and have a great possible ad position in maps. We encourage our clients to participate in the Local Service Ads campaign, even though that is also a paid opportunity.

But when it comes to organic positioning, legal directories such as Avvo, Justia, FindLaw, and SuperLawyers vie to provide convoluted contracts to pay for positioning on their own results. It’s harder to advise on these campaigns. We’ll still look into which ones are worthwhile, especially at the early stages of an SEO campaign when the website’s positioning for keywords isn’t quite competitive enough yet.

As far as consumer behavior goes, the inherent usefulness of a legal directory could be diminished for two main reasons:

So, we will see geo short-tailed keywords results changing over time, but the overall amount of traffic is definitely shifting. In any case, more law firm websites are winning in top results today than ever before.

We have covered different angles of directories for years now, asking questions such as:

Are Paid Legal Directories Right for My Law Firm?

Short strategy: Do a search for your main keywords in your area. Are the top results directories? Then maybe it wouldn’t hurt to check the cost of top spots within those results.

Longer strategy: Is that directory going to maintain those positions for long, or will you sign a 12-month agreement only to wind up with a directory result that went from top 3 of the first page to top 3 of the second page? Alternatively, are the rankings currently low for your practice area/market, enabling you to negotiate for a cheaper position and anticipate higher results later?

The longer strategy is the approach we would suggest. Only historical data and some positive SEO trends can solidify the decisions you make for being on the right directories. We’re only looking at the top 3 organic results—which appear after LSA’s, Google Ads, and Google Maps—as the only positions that really matter for most short-tailed geo searches.

At this moment, we’re seeing websites owned by law firms dominating top results more than they ever have in the past 3 years. The following graphs show the percentage of search queries, combining different metropolitan areas with practice areas. In this presented data, over 60% of all third-position Google results are occupied for a law firm’s website. The second position is just over half of instances. The first position is just under half. The first position has nearly doubled in frequency since 2018, though.

Avvo is all but dead as far as their SERPs for main keywords are concerned. This started to become widely talked about in the beginning of 2020, and that narrative hasn’t changed going into 2021. 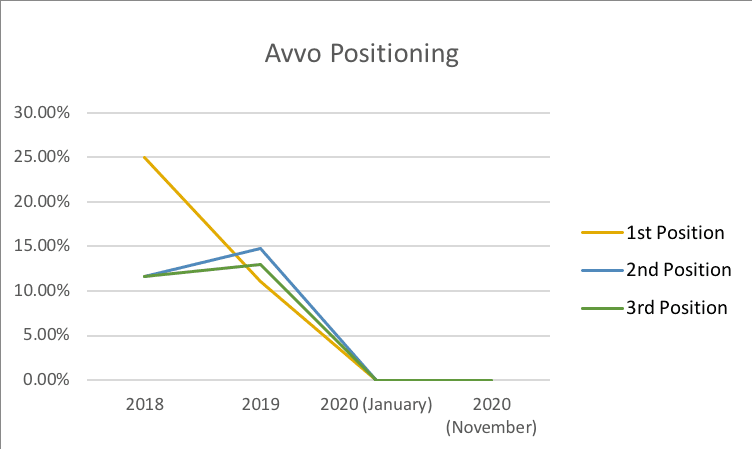 Justia saw widespread adoption as a huge opportunity back in 2019 with surging first position rankings for valuable keywords (also when their SEO services, admittedly, seemed to have more of an impact as well). The correlation here was that their team likely made a huge effort to collect and deploy high-level backlinking resources for their clients and their own directory. The correlation on the decline also seems accurate in both respects, as the first position has seen a decline as sudden and substantial as their ascent, and law firms using Justia haven’t seen the competitive results for their keywords as much as they have last year. (This is more speculation than it is based off of concrete research.) FindLaw appears to be the big winner with incremental improvement for the third position, and stellar first and second position changes since the beginning of the year (nearly double). I will outline the biggest winners for first, second, and third together at the end. Thumbtack, which had a presence in some results in 2018 and 2019, no longer shows up in the top 3 and has the highest position of 7 from our searches. Yelp, which has had a negligible presence for legal keywords, began to show up occasionally in 2019. Today, we see their directory mostly in spots beyond 3—hardly ever for personal injury and criminal defense, and more for divorce, bankruptcy, and family.

Expertise, which had a big presence at the beginning of the year, has lost nearly all of their top 3 positioning (so, probably time to move on from them, at least for now).

What Have the Top Positions Looked Like in the Past?

In 2018, it was amazing to think that Avvo had almost as many first position rankings as law firm websites. Perhaps that’s why they were so aggressive from the sales standpoint, and their acquisition from Internet Brands appeared to have been quite the purchase. By 2019, Avvo had lost nearly all ground here, and Justia took its place. Starting in 2020, Avvo was all but non-existent, and Justia and SuperLawyers had some positioning, but websites owned by law firms have staked their claim. And going into 2021, it seems like FindLaw and SuperLawyers (same company, unsurprisingly), will be the ones to beat yet again. Our SEO Analysis of the Success of the FindLaw Directory

When we analyzed Justia before, we saw one thing that stood out—a huge spike in backlinks. Is this what happened to FindLaw? Let’s take a look using SEMRush. Following where Justia was, you can see somewhat of a correlation with where high rankings occurred, dropped off, then picked up again (the red line shows mid-2018). With the upward outlook of links becoming somewhat apparent, it may not just be the quantity of links being acquired, but also the quality.

Getting links from high-authority websites also helps your own website, of course.

At Market My Market, we’d be happy to help you figure out whether including legal directories in your marketing strategy is right to help you grow your law firm. Find out how we can help by contacting us for a free consultation.

Top 5 Episodes of SEO is Dead and Other Lies